The Roman mosaics are primarily distinguished by their simple aesthetics. Both regarding shapes of the tesserae and the nature and use of color. The more closely you look at them, the more you discover how wisely great effects were achieved with few shapes and colors.

As you might know, there are many different types of mosaics that have remained from the golden age of Rome. This post refers to the so-called opus tessellatum, probably the best known type of mosaics from the Roman period. Its name refers to the dominant form of stones – squares. Both geometric patterns and figural representations were often implemented in this style. And most decorative borders and backgrounds were made in this technique. I will point out the differences of other mosaic types from the Roman period including opus vermiculatum, mosaici a canestro, opus lapilli and opus sectile in other posts.

As I have already reported, we have been working on copies of Roman mosaics for some time. And the closer I look at the originals, the more I notice details and peculiarities. Some of them could help you copying a mosaic of these times or creating your own. So I would like to pass on to you today what I have recognized so far.

The examples here are details of mosaic copies from the school. The originals were found in Aquileia. In the photos you can see quite well the details of the andamenti. To point out the suggestions I make further down, I have added some images in black and white in which I have highlighted the suggestions marked in red at the end of this post. A good example of the interplay of shapes and colors is the fish in the asarathon in Aquileia. Look at the teeth and spikes of his body more closely.

Depending on the style and design of a mosaic, there are quite different types of andamenti. Gradients of lines and arrangements of stones that seem arbitrary at first glance often follow a logic, even in modern mosaics. So here are some peculiarities in the Roman mosaics.

1. Divide surfaces visually from outside to inside

The Romans divided the surface in the opus tesselatum visually from the outside to the inside. That is, the shape of a surface is traced with a line of tesserae. When this first inner frame is completed, the next inner frame is formed until the entire area is filled. (Note: I am not talking of laying here, but of dividing the space before laying.)

The concept of the framing line is omnipresent in the mosaic. It is on the one hand used to frame the background and on the other hand to optically separate the important parts in the image from the background. Like a small halo this line brings some balance into the picture. It also dictates how the rest of the room is divided in the image. Namely, with the same way as described above regarding small areas. In large surfaces, horizontal lines of squares usually fill the space.

2. Use squares, trapezoids and triangles to follow the andamenti

Where possible, the lines of the mosaic are built with squares (1). Depending on the curvature and taper of the lines trapezoids are used (2). Only where a line ends getting very narrow, it will be completed by a triangle (3). A “sdoppiamento”, the splitting of a line into two lines, is solved by dividing it in two (4) with tesserae which should not form a cross joint. This would catch the eye (see also point 6. “Don’t form cross joints”). As the sdoppiamento is a particularly sensitive area which should not attract too much attention, it is important to lay it in a harmonic way.

3. Avoid “steps” between the tesserae

There should be no large differences from tessera to tessera. To visually form a line the mutually facing edges of neighboring stones should therefore approximately have the same width.

In point 1. I briefly mentioned it already: In order to form a round shape – for example, the outer shape of a leaf – trapezoids are layed, their joint always forming a 90 degree angle to the inner line of the circle (5). Like the limbs of your fingers when you form an “O” with thumb and index finger. Where a “wave” breaks, the trapezoid is turned into the opposite direction (6). Sounds complicated? Look at the Roman mosaics more closely and follow your intuition. This will come all by itself.

In order to let a line get more narrow, just put one trapezoid above the other (2). At the same time pay attention to the curves (see also point 4) to select the appropriate tesserae.

These points also apply to other styles, not just for Roman mosaics. For the sake of completeness, I’d like to mention them here.

Not welcome, because they attract the view and therefore let the viewer focus too much: Crosses. Thus, tesserae forming joints in a cross shape. Like the joints you find in your tiled bathroom. Even if you can’t always avoid them: These are not pretty at all!

The central objects in the mosaic are layed beginning at their most important detail, from the inside to the outside. The background, however, should be layed from the outside to the inside to have a stable and clean border. Always work in an open way avoiding bottlenecks. If not you’ll have to invest lots of time inserting tesserae afterwards. Also avoid letting a row of stones stand alone in space, because it will have little support in the cement bed.

At first it is not easy to form a stable thin set while building uniform joints. Somehow, the stones don’t want to stay together. While at some place there is a big joint, in another it is too small.

Sometimes “bellied” tesserae are to blame pushing the neighboring stones away and forming large gaps. With a little practice you’ll find that this problem can be solved by simply turning the stone. As Yin and Yang in mosaics. Or you have to work on the stone again, making it “leaner”.

For good grip in the thin set, the tesserae should be layed into the cement with 2/3. Take care that no cement is pushed to the surface! This looks ugly and could soil the surface of the mosaic.

Also important is the cleaning of the border after each section in order to have a clean row when beginning the next part in another day. You can either carefully clean the mosaic border directly after finishing your work with a small spatula (while the cement is still fresh). Or you cut the slightly hardened cement away carefully with a cutter when you continue working on another day (after more than 3 days this will get difficult, though).

8. Form an even surface

The Roman mosaics were pavement mosaics. If you make a copy, pay attention to build an even surface. As a scale, a tile or a piece of wood is helpful. Stand up from time to time to look at your mosaic with a certain distance to control better.

With a few shades the pictor imaginarius (the artist who designed the mosaic) created amazing effects, patterns and shades. Look at mosaics from the Roman period more closely to understand how colors were mixed and gradients were made. A little visual distance helps to check your color mixing while working.

What I still find a little difficult is not paying too much attention to the many rules above. To just go on and be sure that at the end of it all will look beautiful. I tend to care too much about the shapes of each tessera. I’m sure at that time, the Romans didn’t. After all, as a slave executing the mosaic you had to lay the stones in a neat pace. What helps to be fast is a good selection of harvested material.

Were these tips helpful for you? Do you have something to add? Leave a comment below! 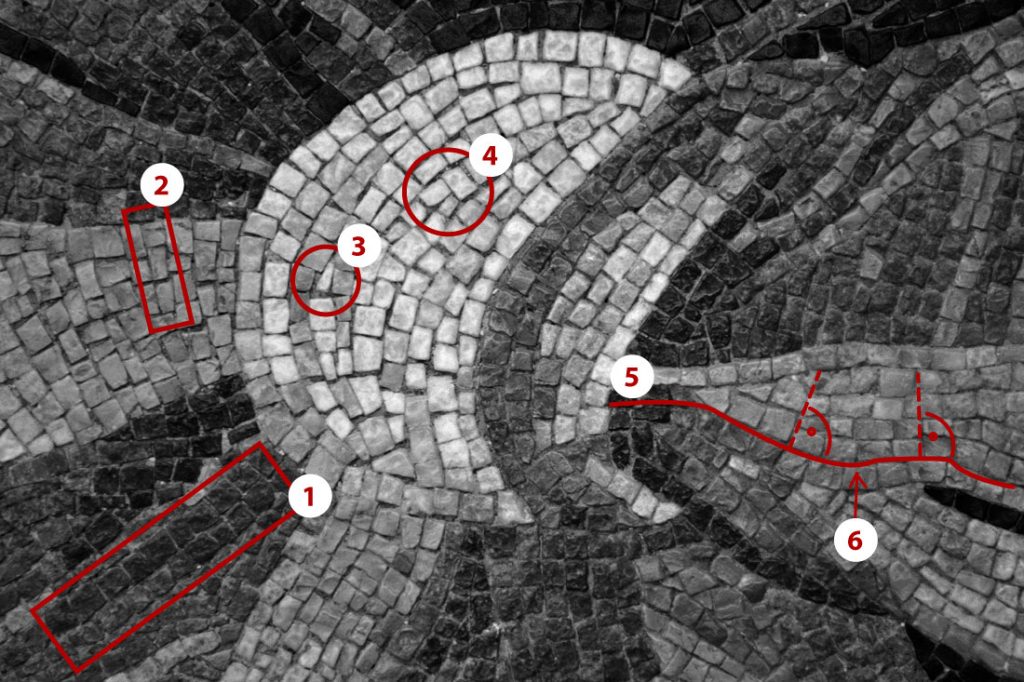 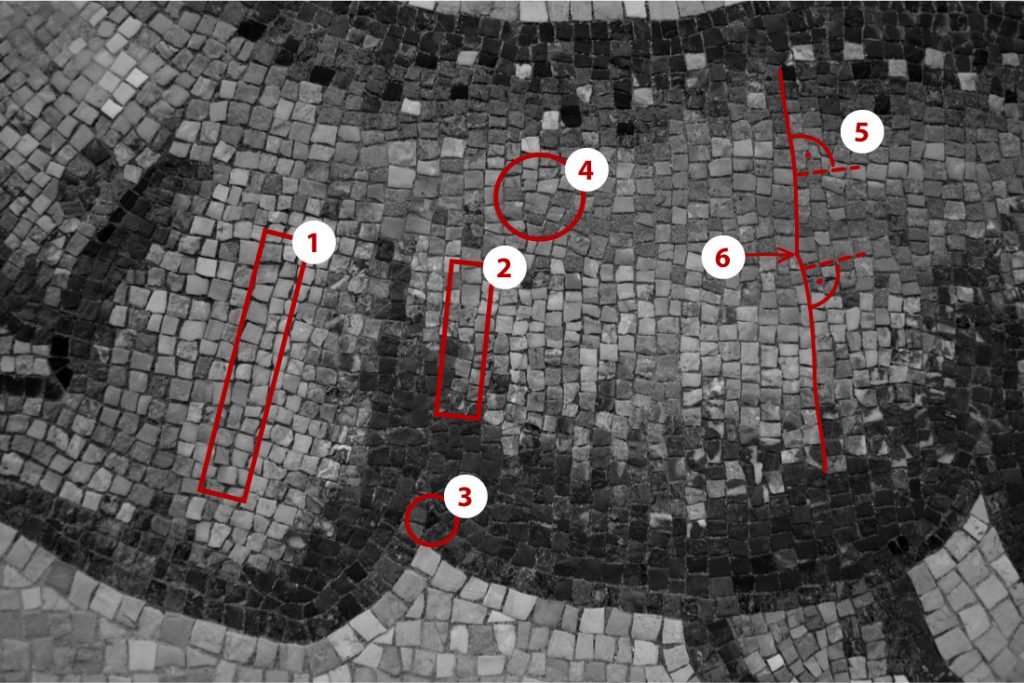 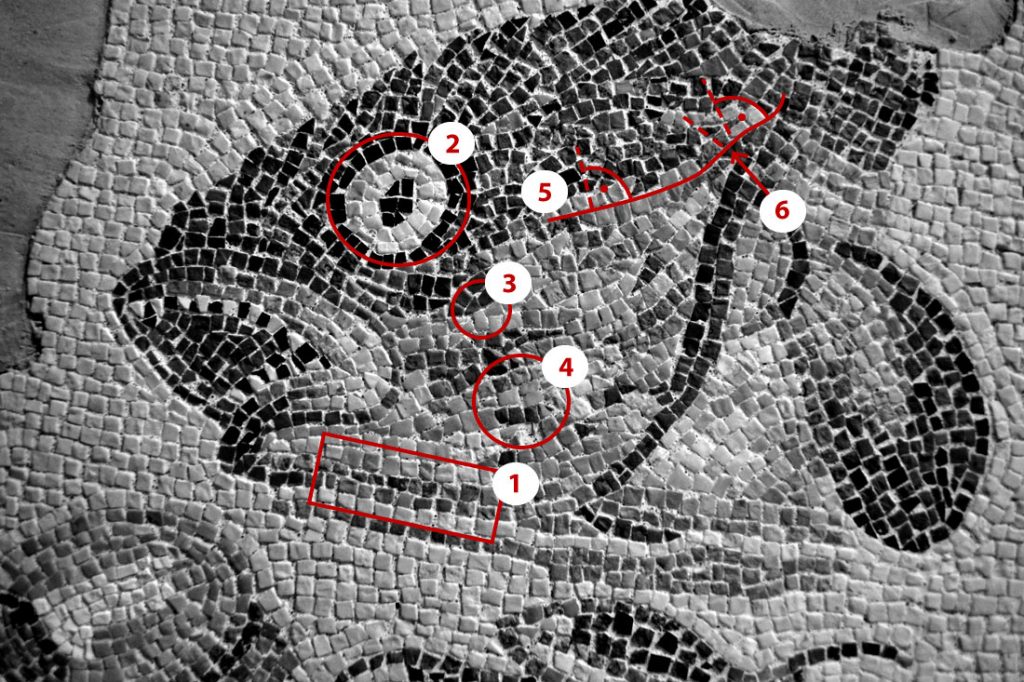