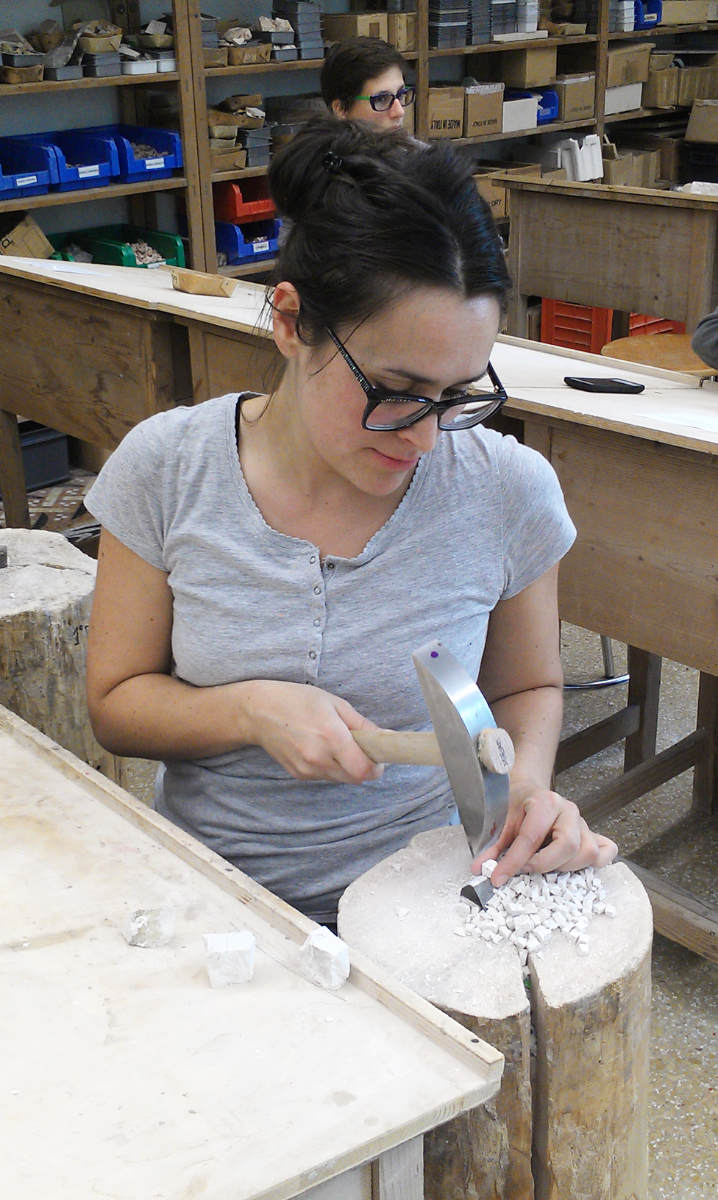 Some time ago I was asked to post a few tips for working with the mosaic hammer. Although I have only been attending the school for a few months and wouldn’t claim to be an expert yet, I would like to pass on to you the essentials regarding the use of this wonderful tool. The first points on posture and breathing may seem a little odd. But I realize very often how much they do matter if I don’t pay attention to them.

Some of the suggestions below are things teached here at school, some are based on personal experience. However, I believe that every mosaicista has his tricks. And that’s fine, because we clearly are not robots. So try out things yourself and pay attention to little changes while using different angles, materials and positions.

By the way: Making mosaic has become a kind of mood barometer for me. If I’m in bad temper, nothing works. Maybe this will happen to you, too. So if everything goes on strike: Just take a walk around the block or go and have a coffee break.

10 tips for working with the mosaic hammer

Really underestimated: A straight posture. As a potato sack, it is really hard to make a decent cut and your back will hurt in the long run. So rather make a long back, keep the upper arm to the upper torso and work only with the forearm.

If you prefer to keep your eyes safe from glass or stone splinters, remember to always wear safety glasses! You don’t like the plastic models from the construction market? Ask your optician to put normal glass in a frame you like and fits you well.

Who is tense tends to hold one’s breath. Then nothing works well. So just try to breathe calmly and let the hammer fall when you exhale. Can have great effects.

Might seem trivial, but is really important: If you are too far away from the wooden stump, the hammer can not hit the hardie at the right angle. Furthermore, the cutting surface of the hammer needs to have the same orientation as the surface of the hardie. They just have to fit together, a bit like your upper and lower jaw when your mouth is closed.

5. Use weight of the hammer

Even if some stones require a harder hitting and thus mean more effort for you: Do not use the hammer with too much force. On the contrary: Always try to use only the weight of the hammer for cutting first. So let the hammer fall rather than strike. Otherwise you risk that the widia of the hammer is ruined.

6. Think before you cut

Produce little waste
In the beginning, you tend to start cutting before asking yourself how to organize your mosaic and reflect on the material, producing more waste than necessary. So don’t forget to check these points before starting: How big is my mosaic? How do I divide it into approximately equal parts? Of what size is my raw material? And how can I benefit from its size to create little waste? (If you work with smalts measuring 1 cm x 2 cm, you could work with pieces measuring 1 cm x 1 cm on average, 0.5 cm x 1 cm , etc.)

Create a prototype
Sometimes you lose track on how big or high you wanted the pieces to be and tend to cut smaller and smaller. To avoid that, it is helpful to prepare some “prototypes” you can compare to now and then.

Cut many useful sides
The more proper your pieces are, the more effective you will be in the implementation of the mosaic. Try, therefore, to cut pieces with many clean sides so that you can use each piece in different orientations. This is of course less valid for modern techniques or spontaneous work, but more for traditional mosaics and those in which repeated forms are used.

To cut triangles, first form a cuboid. Then cut two triangles by dividing it diagonally into two equal parts (see right figure). I know you will say: How am I supposed to cut two triangles out of a cuboid without having the corners look crippled ? It works! It is important that the surface of the cuboid is as flat as possible, though, and that you strike as horizontally as possible with the surface of the hammer. If you need an isosceles triangle, just cut off another corner.

Pentagons
To cut pentagons, (see figure at right) of a cuboid cut off three corners in the angles you need. Like this, you should receive at least two clean sides. Do not despair: To cut proper pentagons is really tricky.

Cubes or pyramids?
Depending on which mosaic technique you use, you will need pieces whose top and bottom are shaped in the same way or those that taper towards the (adhesive) bottom side like pyramids.

In the indirect technique, for example, pyramid-formed pieces leave sufficient space for the cement which will hold them together later.

To cut cuboid-formed pieces or pieces with the same top and bottom, pay attention to a 90 degree angle when striking (see upper figure at right).

To cut pyramid-formed pieces, there are two options: 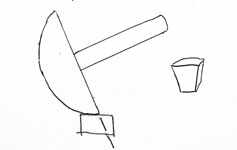 1.) Put a piece with a plain surface on the hardie and cut in an angle smaller than 90 degrees so that you get the pyramid shape immediately. This technique requires a little practice, but is then very efficient (see lower figure at right).

2.) Lay a cuboid-formed piece on the surface of the wooden stamp. Hold the hammer directly under its head. Tilt the piece so that it stands on an edge and cut off one diagonal part after the other. This will take you longer compared to 1.) and may be a bit tricky at the beginning. It is a bit difficult to show this process in a figure so I will try to add a video soon to explain better.

Basically, while with 1.) you get a pyramid-shaped form directly, in 2.) you cut away parts to get the diagonal sides afterwards.

To cut precise shapes, it takes practice. Do not expect to cut perfect triangles after two hours. But you will learn fast. Rely on your common sense and take time to get to know the texture of the material better. You will soon get used to certain techniques and good cuts won’t be coincidences any more.

Many – including myself – have been annoyed having the hammer landed on the floor because of careless depositing. This can ruin your hammer and the cutting surface. Sharpening could cost you a lot because few have the equipment. So to keep on working with your martellina for many years (some use 50 year olds) always make sure she is stored safely.

After a few months of intensive work with the hammer, I can only recommend: Stretch as often as you find the time! Your wrists, back and Co. will thank you.

You have more tips and tricks or questions regarding the use of the mosaic hammer? I look forward to your feedback!

Tags from the story
Scuola Mosaicisti del Friuli
Written By
miriam
More from miriam
This week we have tested the effect of individual colour combinations by...
Read More