This year I am not lucky with the weather. Bologna welcomes me with sunshine and 70 degrees to let me go to Ravenna with a week full of rain. But I’m not here to enjoy the sun. I want to take a course at KOKO Mosaico. And work with mosaic hammer, smalt and marble.

When I arrive at the studio for my beginner’s course – including technica ravennate and direct method – on Monday morning, it’s just like I expected. Lots of space, a lot more material. A few tree trunks with Martellina (hammer) and Tagliolo (chisel) are spread around and reveal where people have been working the day before.

It’s early in the morning and a young woman, Claudia, greets me. Later I learn that she is a graphic designer and has attended a course at KOKO Mosaico about one year ago. Since then, she commutes from Rome to Ravenna to learn and work in the studio.

A course at KOKO Mosaico is no usual 9 to 5 workshop. It may happen that you are the only person who makes a course. Or that the other students will learn a different technique. And yet, or perhaps due to that I had the feeling to learn very intensely. Luca and Arianna, the founders of the studio, give students the guidance and explanation according to their knowledge. Simultaneously, thousands of things happen throughout the day. The two take care of interns from the School of Art, give brief assistance, the studio is cleaned up, I choose the material for my work together with Arianna, we eat together in the cafeteria on the other side of the street.

Luca Barberini and Arianna Gallo, who are also a couple in private life, have a wonderful way to pursue different roles simultaneously. As instructors, artists, organizers and parents they are active all day. And create an atmosphere in which it is fun to learn.

KOKO Mosaico, that you notice straight away, is an open place. Open to visitors, for the transmission of knowledge, for the effervescence of creativity. Located on Via Roma, you can hear trucks, firefighters, people walk past. And that’s good, Luca tells me later in the interview. Because KOKO Mosaico wants to be part of the action. And not isolate themselves. Keep moving. During my week in Ravenna curious people pass by to watch the works from the gallery and inform themselves about the courses. Âniko and Giuseppe of the artist group CaCO3 prepare an image for the next exhibition. Artists and curators come and exchange ideas about the next project. Now and then the phone rings and Luca makes a joke. “Pronto soccorso?” – “Emergency Room?”. Music by Vasco Rossi and Elio e le Storie Tese run from the playlist. It’s almost as if the studio and its actors merge with their surroundings.

In the end, I learned a lot: that the technica ravennate is highly complex and requires a lot of patience, but the result is even more impressing. That sometimes the simple things are the most beautiful. That you can produce a bioadhesive from rabbit bones. And that working with the mosaic hammer is incredibly relaxing – almost like meditation.

I’ll be back for sure. 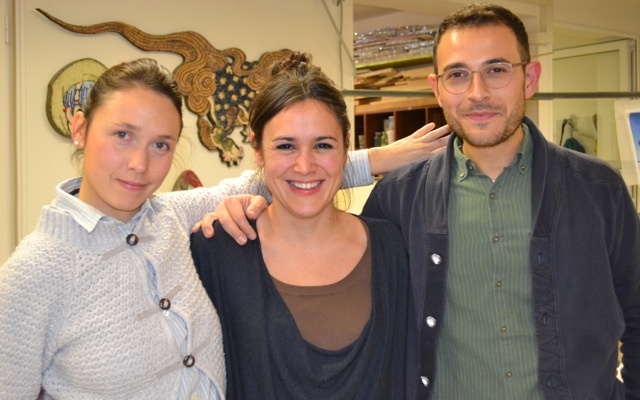 Tags from the story
glueing, made by Miriam, Ravenna
Written By
miriam
More from miriam
You haven't signed up yet? Get one of the last places to...
Read More