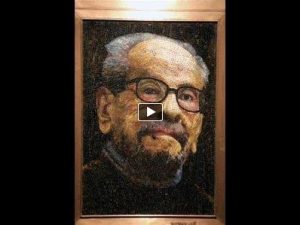 He lives and works in Cairo and is known for his celebrity portraits: Saad Romany has immortalized Omar Sharif, Queen Elizabeth and Oprah Winfrey in tiny glass particles. But also his more abstract works such as Spirit of Music have gained international attention.

Jack of all trades

The 50-year-old studied fine arts in Tehran. And worked as an interior designer, design consultant and jeweler. That is why he is perfectly familiar with the processing of small parts such as diamonds, rubies and emeralds. Besides the use of traditional mosaic techniques his experience comes in cutting and fixing of different materials inures to be very good. He has now been practicing mosaic art for over 20 years.

In the last two years the grey bearded artist has participated in two exhibitions in the Cairo Opera House and the Coptic Museum in Cairo. He was the world’s first micro-mosaic artist with a solo exhibition.

Saad Romani is celebrated by many critics as the pioneer of modern micro mosaic. So far he still sells none of his works. In his eyes this would mean to remain hidden. His aim is it to enrich as many people with his art.

As part of his exhibition at the Cairo Opera House was this video. It displays many of his works:

Saad Romany once described his enthusiasm for micro mosaics in an interview with Egypt’s Al Masry Alyoum Newspaper:

Although I worked for a period as decorative jewelry designer and engineer in one of the major Arab companies, the micro mosaic art attracted me, through its potentials and its special formulation ability. It therefore gives the artwork on added value, where the plate is solid enough to stay immortal. This art represents the steadfastness against the factors of time.

Written By
miriam
More from miriam
You can find a great article about the American artist Sonia King...
Read More